I also configured the environment after installing the JDK, and the configuration of the environment was fine. Finally, I downloaded Eclipse and opened it and found the error shown in the following figure:
Java was started but returned exit code=13
C:\ProgramData\Oracle\Java\javapath\javaw.exe 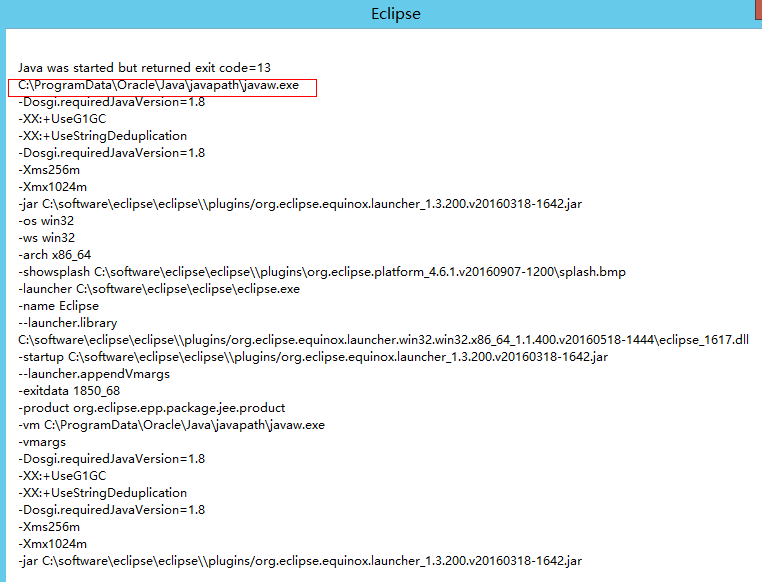 After the above sentence is added, restart Eclipse, and the following error is found:
Failed to load the JNI Shared Library “C:\Program Files (x86)\Java\ JDk1.8.0_101 \ JRE \bin\ Server
\jvm.dll

Therefore, I looked for errors such as Failed to load the JNI Shared Library. Generally, there are two cases:
1. There is a problem with the environment configuration of the JDK
2. JDK version not consistent with Eclispe (32-bit/64-bit)

So from our results above we can see that we have changed the configuration in Eclipse.ini and still can’t fix the problem. There is a new problem, which is probably the JDK and eclipse version.

According to the above methods, it turned out that the inconsistency between the version of my JDK and eclipse caused our initial problems. My operating system was 64-bit, eclipse was 64-bit, while the JDK was 32-bit. Finally, I downloaded a 64-bit JDK and started Eclipse as normal.