The correct address is:

Save, exit and execute again.

From a file on the local copy server, use the following command:

When running semget under Linux to create semaphores, it returns – 1 and the creation fails;

1. This function is a system function. You can only confirm the actual error code with errno, print errno through strError, and return no space left on device. Is the system space insufficient? Insufficient space to create semaphores?

2. Go to errno. H to check the error message enospc corresponding to the actual error code. What does this field mean?

It is basically determined that it is caused by the system semaphore. First, temporarily modify the kernel semaphore parameters and run again to see whether it has been solved.

4. The following commands are used in viewing semaphores

5. Here, in the process of finding semaphore resource leakage, in order to facilitate real-time viewing of semaphore information, the semaphore output is written into the script and printed circularly

6. Note: the final problem here is to see why the semaphore in the code exceeds the limit. Normally, the semaphore will not exceed the system limit.

the apex library is missing and needs to be installed! Note: do not use PIP install apex. Although it can be installed successfully, it will still be found that there are errors when running the program in the end. It can’t be used

The specific installation steps are as follows:

After execution, if the results shown in the figure below appear, the installation is successful 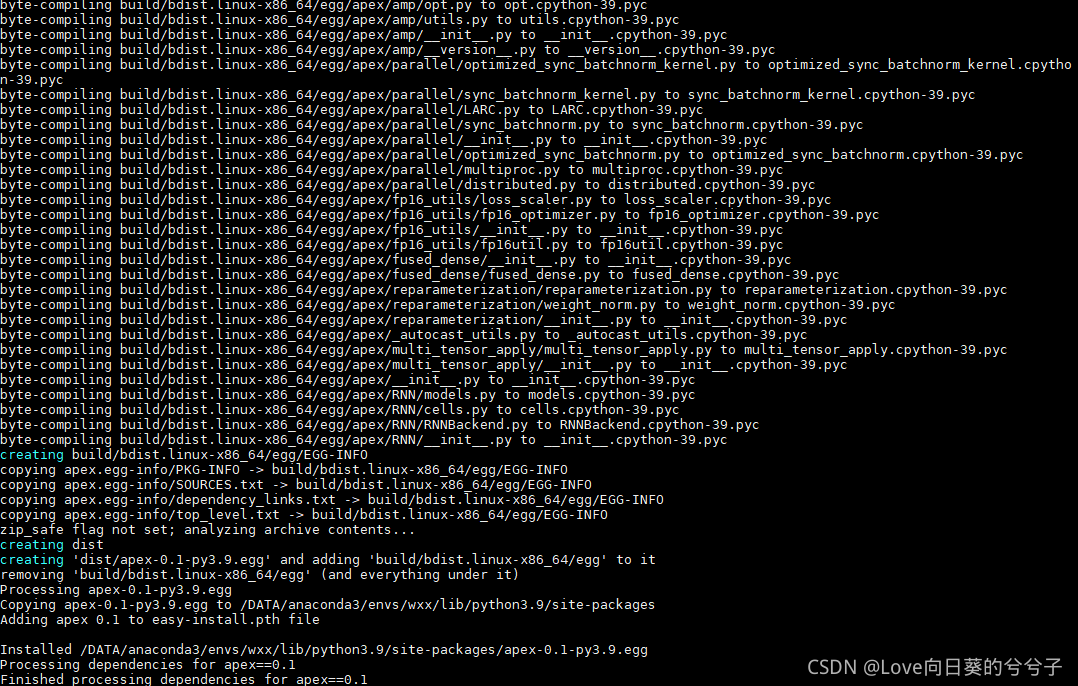 Remember to collect, in case you can’t find it next time
for my sake, please give me a compliment before you leave

After solving the installation of docker desktop above, I continue to operate according to the instructions of vs code plug-in remote container, in order to connect and edit the files in the container on the remote server (Linux) on the PC (Windows).

After everything is completed, the container is connected, but an error is reported. The log content is cannot connect to the docker daemon at http://docker.example.com. Is the docker daemon running. However, the docker desktop of my PC has already started docker, no problem.

1. Prompt for no access during installation
open the install file with sudo command, and remember to CD to the install directory

if the program is stuck and cannot be opened after entering the password, open the terminal and enter the following command

2. Prompt for no access when installing the toolbox using the built-in add on
use Chmod to adjust file access rights

after adjusting the permissions, you can download it, but an unexpected error appears at the end, which makes it impossible to install it
download the MATLAB installer again and reinstall it. Note that you don’t need to reinstall it all. Just select the toolbox you want

After configuring the ROS melody environment for Jetson nano B01 and planning to install the turtle BOT, you need to install opencv3.2.0 and add GPU acceleration support to the compilation of OpenCV. There is a problem when installing opencv from the source code:

For Oracle database in remote multi instance linux environment, an error is reported when executing conn/as SYSDBA: ora-01031: insufficient privileges. The solution process is as follows:

Step 3: the following errors occur after I finish executing:

Step 4: specify the connection instance. The orcl here should fill in your own instance name.

Step 5: when reconnecting, an error is reported connected to an idle instance.
. Note that this only means that the instance is not started, which is not a big problem. First query the status select status from V $instance

Download the source file from GitHub on the local machine, and then upload it to the Linux server

The current server cannot be connected to the request you want to request.

1. Ping xxx.xxxx.com on the current server to see if it can be pinged (If the ping fails, it is a proxy problem, add xxxx xxx.xxxx.com in the hosts file.)
2. If it can be pinged, use the curl command to request the path to see if it can be called
3. If you are using the ip path interface, the call may be unsuccessful or the default port is not opened (80 is the default port of http, 443 is https)
4. If it can be pinged and the interface can be successfully called by using the curl command on the server, but it cannot be called in the project, it may be that the hosts file has been modified but did not take effect. Solution for this situation: add hosts in the container or inherit the hosts when starting the container (inherit hosts: when starting the docker container, add a sentence $(cat /etc/hosts|awk -F ”'{if(NR>2 ){print “–add-host “$2”:”$1}}’), you can integrate the host’s hosts file)