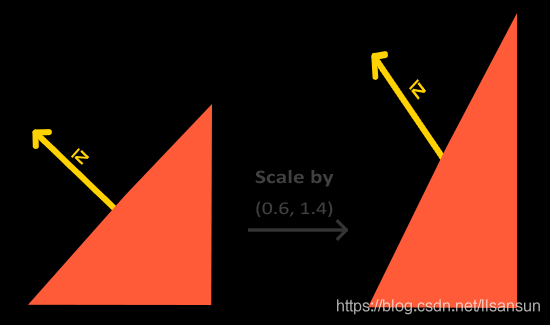 Whenever we apply an unequal scaling (note: equal scaling does not break the normals because the direction of the normals is not changed, just the length of the normals, which is easily fixed by normalization), the normal vector is no longer perpendicular to the corresponding surface, and the light is broken.

The trick to fixing this behavior is to use a model matrix that is customized for the normal vector. This Matrix is called the Normal Matrix, and it uses some manipulation of linear algebra to remove the effect of the incorrect scaling of the Normal vector.
The normal matrix is defined as “the transpose of the inverse matrix in the upper left corner of the model matrix”.

That’s the whole derivation of the inverse transpose of the upper left corner of the model matrix.