You must be an Admin or Technical user in order to deliver content or metada.(1070)

The error is as follows:

ld: library not found for -lXXX

When we refer to static libraries, we do not configure library search paths, which results in an error 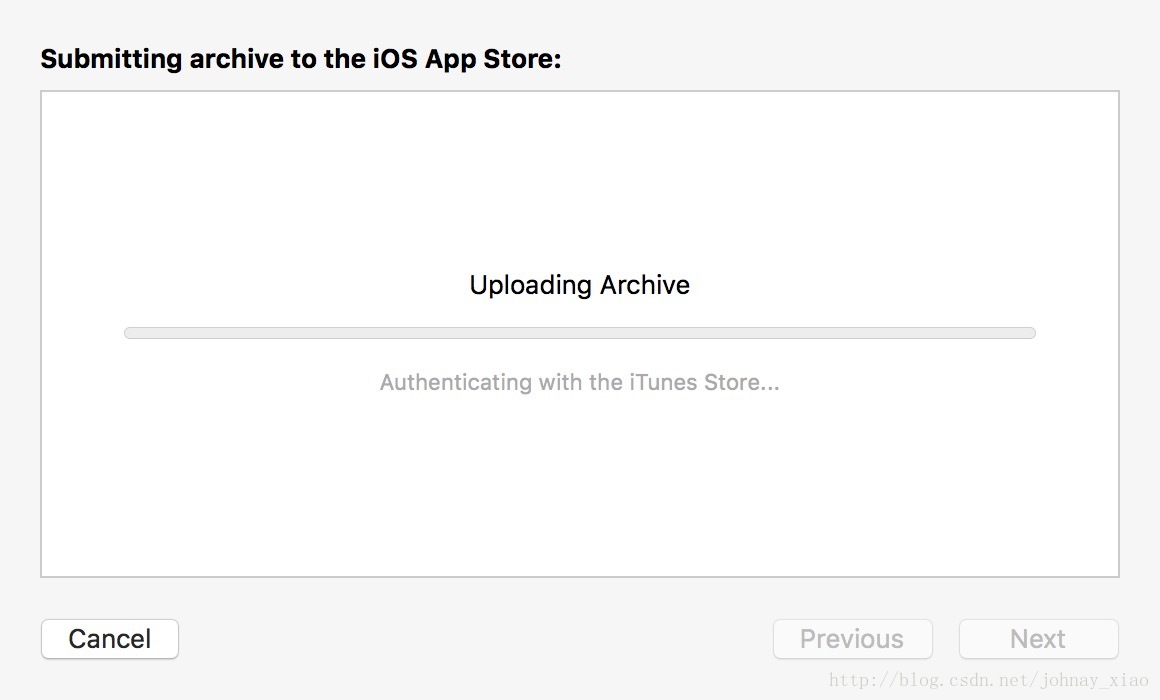 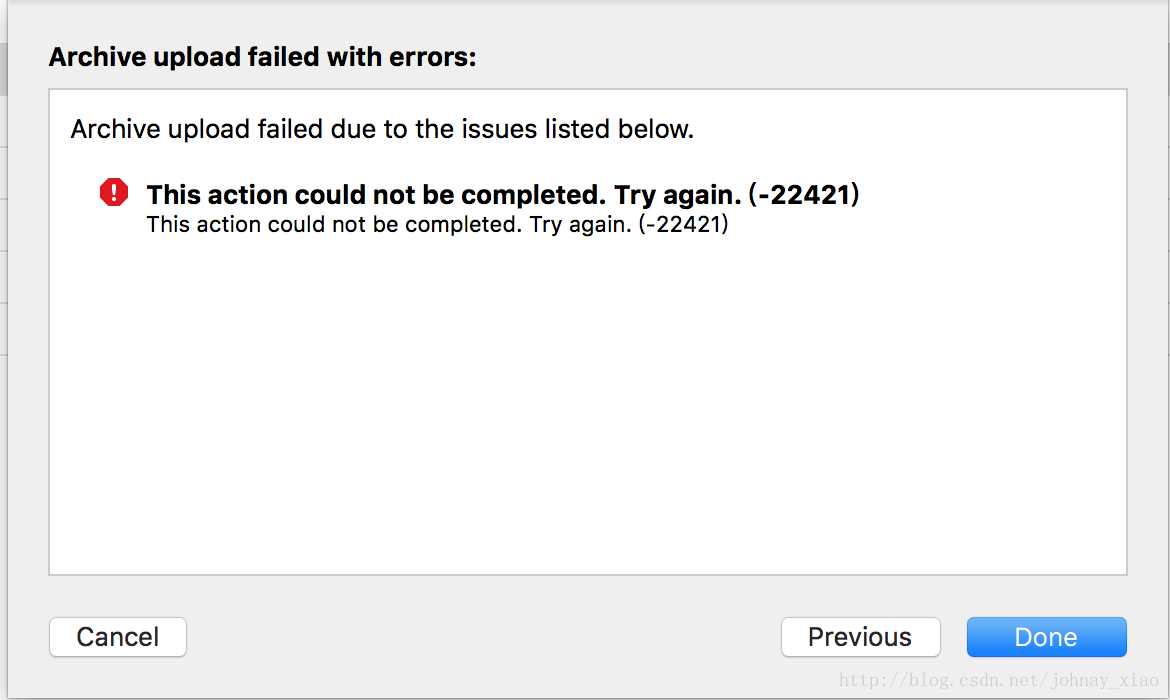 Respect the labor achievements of the Creator

We must wait for the third command to be executed!

In the process of IOS development, this problem is easy to be confused. Let’s have a break today.

In short, there are two aspects to this problem.

The error is as follows, which means that it is an exception when querying Library .

The error is as follows, which means that it is an exception when querying framework .

The above problems have been solved. If you want to know more, you can continue to look down.

The explanation that can be found in official documents is as follows:

If your project links to frameworks that are not included in any of the standard locations, you must explicitly specify the location of that framework before Xcode can locate its header files. To specify the location of such a framework, add the directory containing the framework to the “Framework Search Paths” option of your Xcode project. Xcode passes this list of directories to the compiler and linker, which both use the list to search for the framework resources.

If the frameworks you refer to are not in standard locations, you need to set “framework search paths” in the configuration file of the project to specify search paths for compilers and linkers.

Although it is said that, what is library and what is framework are still very vague.

However, we found some blogs to illustrate this problem, which are quoted below.

In the development of IOS, we often encounter some path settings, such as the introduction of Baidu map SDK, copying projects to other computers, or reporting the error of library not found when multiple people develop at the same time, or introducing a third-party library, such as asihttprequest / retableview often reporting ? Include & lt; & gt; error, so we need to configure some search paths.

Xcode will automatically set the search path of the. A file to be dragged to the third-party library (. A files ) in the project. In order to facilitate transplantation or multi person collaborative development, it will usually be manually set.

For example, we will set the SDK of Baidu map as follows:

(1) ? Include & lt; iostream. H & gt; : refers to the header file under the compiler’s class library path

(2) ? Include "hello. H" : the header file that refers to the relative path of the project directory

Objc_msgSend can be used with arguments before Xcode 6. Too many arguments to function call after Xcode 6. ;
The solution

this method fails in Xcode 12.
2, Through type casting

The number of parameters to be passed is self-defined

Xcode error:
Could not launch “” Domain: IDEDebugSessionErrorDomain Code: 3 Failure Rea
before test has been on the iPhone, after changed the error as above.
Reason:
did not trust its own description management account when debugging a new device for the first time.
The solution:
in the description of the management and trust his account.

OpenGL FAQ and basic concept knowledge (continuously updated!!)
1. The concept of matrix in OpenGL, what is Model,View,Project?
We know the World in the OpenGL Matrix (World Matrix)/View Matrix (the View Matrix and Projection Matrix (the Projection matirx)
in the Model: the Matrix determine the World coordinates of a unified, mainly aimed at the Model of translation, rotation, scaling, shear, and other functions, is the Model from local space into World space.

Projection matrix is the part of the scene that we can see, with the camera/observer position and so on (set mouse movement, scroll wheel, etc.), and converts all world coordinates to View coordinates.
2. Scheduling between CPU and GPU in OpenGL

OpenGL program involves two types of processing unit CPU and GPU. engl main program has CPU call to run, image processing part through GLSL to GPU execution.
Data transfer between CPU and GPU is divided into three steps:
1. First use the built-in OpenGL function to generate an ID number
2. According to the need for the ID number of memory types of binding, binding to be used in the receiving system after the completion of the GPU memory of the data in the “identifier” will be ready,
3. This part of memory is initialized. The initialized content is from the system memory, and this part of function is completed by the glBufferData function. After the data is submitted to the GPU dedicated memory, it is necessary to allocate the data according to the application scenarios, such as some data as vertices, some as colors, some for illumination control and so on
In addition, due to the high parallel structure of GPUs, all GPUs have high computational efficiency in processing graphics and complex algorithms. Most of the CPU area is controllers and registers, while GPUs have more ALUs, logical operational units for data processing, rather than data caching and flow control.
The concept of buffers in OpenGL
[1] Frame Buffer: A frame buffer is a combination of the following buffers. Using frame buffers allows you to render your scene into a different frame buffer, which allows you to create mirrors in the scene, or create cool effects that store data for the display.
[2] Color Buffer: Stores the color of all fragments: that is, the effect of visual output.
[3] Depth Buffer: determines which facets are occluded according to the Z value of the buffer. Automatically generated by GLFW.
[4] stencil buffer: Similar to depth testing, the template value is compared to the default value to determine whether to discard the fragment.
Data is processed in OpenGL in the following order: vertex shader – fragment shader – template test – depth test
The concept of depth testing
1. What is depth?

OpenGL will have a special area for storing Z value (the Z value on each pixel), which is the depth cache.
2. Depth Buffer Function?
In general, when we draw a graph, the later drawing overrides the previous graph, and the general drawing order is drawn from the back to the front. So there is a performance problem with the “covered part”, where the first part is covered, and all you see is the top part of the module and the bottom part of the covered part is not meaningful!
depth test appears to solve the covering problem nction: when the depth test is turned on, the Z value will be checked. The same area close to the observer will be drawn, and other covered areas will not be drawn, regardless of the order of drawing.
3. How to use the deep cache test? 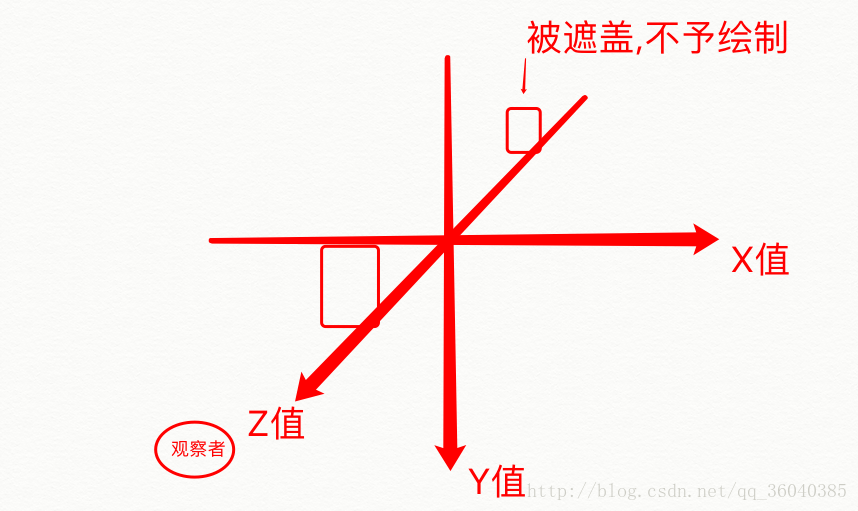 If the observer is in the negative direction of the z-axis, the smaller z-value is closer to the observer 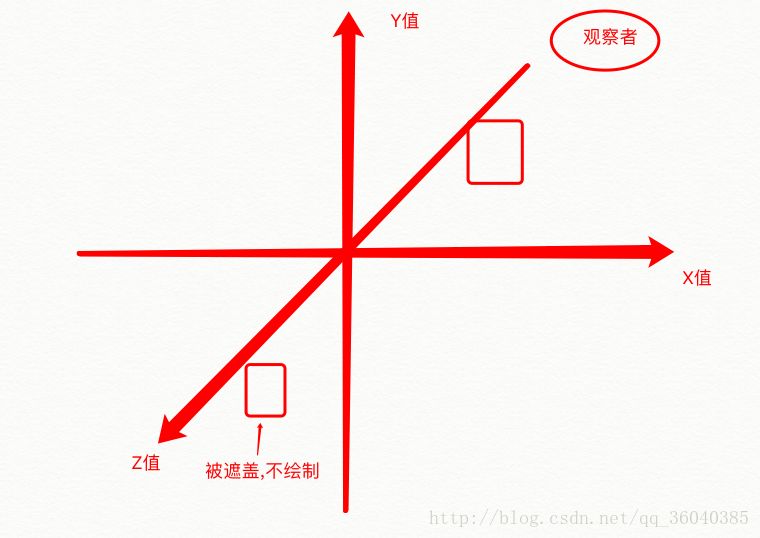 How to solve the conflict problem caused by the same depth value (same Z value)?
The first method: in the second drawing the same Z value, the tiny offset cover problems
note: must be very careful to ensure that the Z value of the gap, or like a refrigerator on the refrigerator as suspended risk
The second method is to sample the GLPolygonOffset function so that the depth value of the fragment can be adjusted so that the depth value is offset without creating a suspended emphasis

The reason for looking for an afternoon: the original sentence
glBufferData
(
GLenum
(
GL_ARRAY_BUFFER
),
MemoryLayout
.
size
(ofValue:
vertices
)
.
vertices
,
GLenum
(
GL_STATIC_DRAW
In SWIFT2, the sizeof method is replaced with the memoryLayout method. The memoryLayout. Size (ofValue: vertices) retrieves only one of the vertices in the array, so it needs to be multiplied by the number. GlBufferData (GLenum(GL_ARRAY_BUFFER), memorylayout.size (ofValue: vertices)*6, vertices, GLenum(GL_STATIC_DRAW))

2. If the previous style is used

4. To fix this, set the frame after the datePickerMode and set it to normal

Back to the code. Since storyboard is used, the jump of push and model saves writing code, similarly, the jump of “return” also saves code.
RedViewController. M

}
It’s important to note that the return value of this method must be an ibaction, and the argument must be a uistoryboardsegue. As for why, the following code will show.
Go back to your storyboard file and observe that the RedViewController scene has a green button below it (not because you wrote the code above, but because it’s always there). 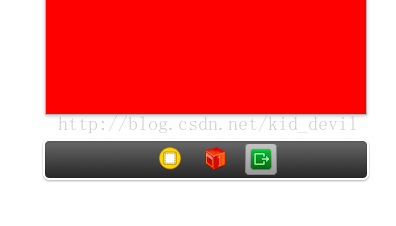 Select this method and drag and drop to the Back RedVC button on the YellowViewController. 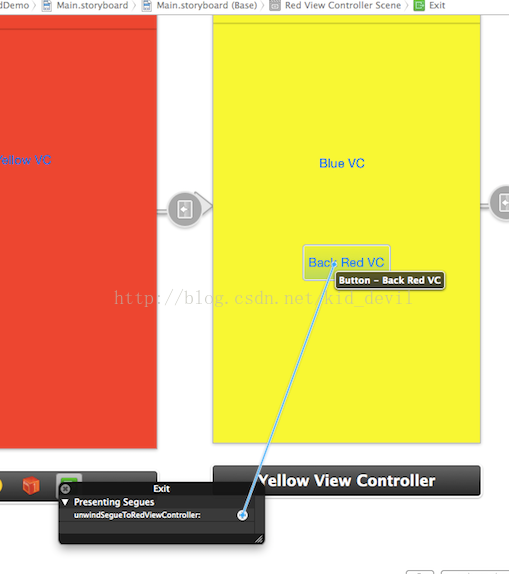 And that’s why the argument to a method is a segue, where you get the source View Controller.

}
Associated unwindtoblueviewcontroller methods on the corresponding button.
At this point, I’m done with “back” in my storyboard, and I spend most of my time dragging and dropping controls without writing the relevant pop dismiss method at all. That’s one of the strengths of storyboard.
Is it possible to implement it in code?You can.
Select GreenViewController Scene in your storyboard, and on the left you can see the representation of the unwind segue, kind of like the DNA sequence yes, once you select it, the only representation that defines it is the greenUnwind

In greenviewcontroller. M
Method associated with back Code button:

Compile, there are no errors, the program.