On the night of the 14th, many people appeared in their WeChat Momentals such as “When you click the full text on an iPhone, it will flash back.” There were several blank lines below, so you need to click “full text” to see it. However, once you click “original” on an iPhonWeChatB1, it will flash back directly, while there is no problem with Android phones. 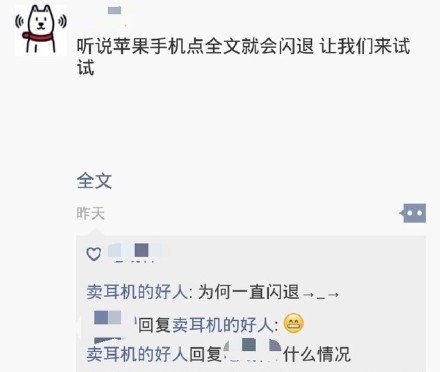 In fact, there is a set of code hidden below this article, which is only available for iOS. But fortunately, this is just a flash back, will not appear WeChat can not open the situation. This is the code from two years ago. If an iPhone user receives this code, it will cause WeChat, Twitter, SMS, and other apps to crash or crash. The code exploits an iOS remote denial of service vulnerability, which has since been fixed, but now a new code has appeared that causes WeChat to flash back when the iPhone is turned on.)
WeChat ->; “I” – & gt; ‘My photo album’ -> Click “today” on the camera there and send a picture to restore it.
There is another method for flashback in Moments, you can clean up the WeChat cache in WeChat Settings – General, this operation will clear the Moments cache, can be restored, if click the Moments flashback again, it is proved that your friends have sent flashback characters.