Maybe when you debug the program in Viusal studio, you find that output windows prints out a line of information about a first chance exception of type ‘ System.NullReferenceException ‘occurred, you may have wondered what is the first chance exception, Does this sentence mean that there is something wrong with my code?But if there is a problem, why does my program not throw any exception but display such a message in output windows?If I don’t look at the output window, I may not find this message at all.

Let’s talk about the first chance exception. When you are debugging a program in VS, when there is a problem with the program, it is the debugger (which can also be understood as vs itself) who first catches the exception. At this time, vs has to decide how to solve the problem.

is to stop now, throw out the problem, pop up a dialog box, tell the user that there is a problem in your program, and let the user decide whether to continue or stop.

So what does vs rely on to decide how to deal with it?Under debug settings, if CLR exception is checked, vs will catch an exception. It will not only print a message in output windows, but also pop up a dialog box to notify the user. 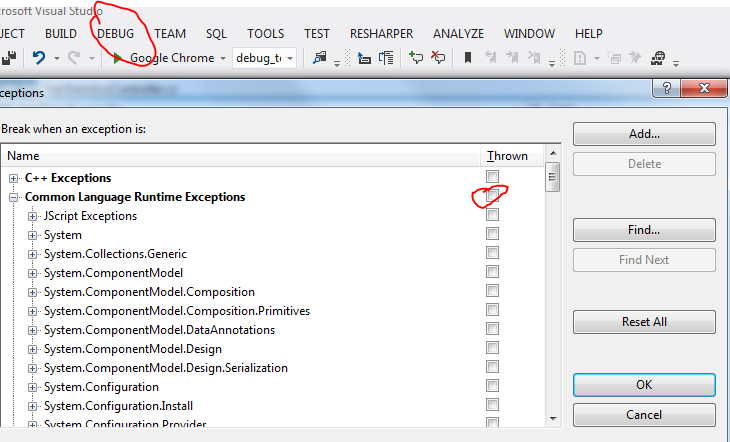 If vs catches and throws, the program stops at line 36 and notifies the user. If vs lets it go, the program jumps to line 39 and continues to execute the processing logic of the code.

Two concepts need to be understood. When C # programs are really running, it is runtime. As the top manager, exception will be thrown here. When debugging in VS, VS Runtime is the top manager, exception will throw it here, so that VS can notify users through the form of dialog box. First chance exception will inform the user through the pop-up box. If the user selects continue, the program can continue to run. However, if the code does not have a corresponding capture mechanism to deal with it, it is thrown to vs runtime again and captured, then it is called second chance exception. At this time, a dialog box will pop up again, but this time, the code will not continue to run.

Moreover, it should be noted that if we do not check the above option, vs will throw an exception dialog box on line 39 when calling the program.

But if we check it, we will throw an exception dialog box where the 52 line exception actually occurs.

Some people will ask if I should check it?If your project references a heavyweight tool like NHibernate, the DLL itself is likely to throw exceptions in many places, but the DLL itself has try If you check “catch”, vs will capture the catch code block before it is processed, and then inform the user. There will be a lot of such cases. As a result, the user will point to a lot of continue dialog boxes. Don’t check it at this time.