A client of mine started having a strange problem when browsing pictures and videos on his Windows 7 PC: it would popup with the following error message:

The odd thing was that the error only came up when browsing video or picture files, not any other type of file. After doing some research, we managed to fix the problem, but had to try a couple of different things before it finally worked. In this post, I’ll write out the different possible solutions and hopefully one of them will work for you.
Method 1 – Update Codecs
Obviously since it was a video/picture problem, we thought it could be something with the current set of codecs installed. This client in particular liked to copy and rip stuff, so he had ffdshow installed plus some other codecs. We manually updated all the codecs to their latest versions including ffdshow, Windows 7 Codec Pack and others.  You can download the latest version of Windows 7 Codec Pack here.
If you have DivX or Nero installed on your computer, go ahead and update those to the latest versions too. In some cases, you may have to uninstall a program and then reinstall it later on.
Method 2 – Kaspersky Antivirus
There has been a known issue with Kaspersky antivirus that cases this problem to occur. If you’re using Kaspersky, you need to make sure you update the actual Kaspersky software, not just the antivirus definitions. You can also test to see if this is really causing the issue by disabling the program altogether and seeing if the issue goes away.
Method 3 – Commands
There are a few commands you can try to run in Windows to see if it fixes the problem. You have to run these in the command prompt. Click on Start, type cmd and then right-click and choose Run as Administrator. Now type in the following commands, pressing enter after each one:

That will re-register a few dlls with Windows and possibly fix the COM surrogate error. If not, keep reading!
Method 4 – Check Disk for Errors
If you’re seeing this problem only on a particular drive like an external USB device, then it could be that there are some bad sectors on the hard drive. It’s a good idea to run a chkdsk to make sure the drive is functioning properly. You can read my previous post on how to use the chkdsk utility.
Method 5 – Disable DEP for dllhost.exe
Another fix that has been mentioned numerous times is adding dllhost.exe to the exclusion list for DEP (Data Execution Protection). You can read my previous post on how to turn off DEP in Windows. On the last step in that article, click Add and then add the following exe file in Windows 7 32-bit:

For Windows 7 64-bit, you have to exclude the dllhost.exe file in this path: 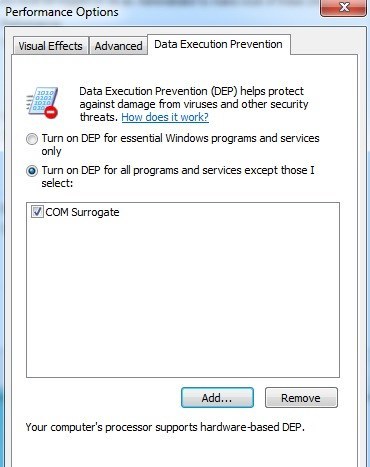 Method 6 – Display/Printer Driver
This can be a little tricky, but if you recently updated a driver for your display or even some other hardware on your computer, try to roll back the driver to the previous version. It’s usually more so with the display driver than anything else. In some cases, updating to the most recent version of the display driver can also fix the issue, so you’ll have to play around with either upgrading the driver or rolling back the driver.
To rollback the display driver, go to Device Manager, expand Display Adapters and then right-click on the display device and choose Uninstall. You’ll see a pop up window where you need to check the Delete the driver software for this device box. 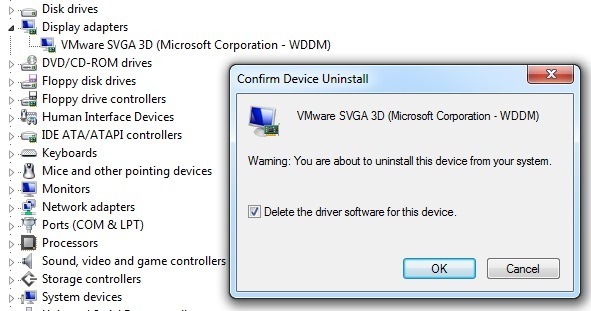 In the same light, you should also check out your printer drivers and update all of them, if updates are available.
Hopefully, one of these methods will fix the COM Surrogate error in Windows 7. If not, post a comment here and let us know your specs and what you’ve tried and we’ll try to help. Enjoy!